So what’s the best thing to do the next night after going to the James Bond premiere?

Go to see the film again?

Yes, 24 hours after watching Skyfall at the Royal Albert Hall, I was at the cinema for more 007 action!

It was thanks to my friend Rache. When not organising fancy dress themed nights out, she loves to enter competitions. She’s very good at winning and has bagged some incredible prizes.

Rache, me and Barbarella

For months Rache had been trying to win tickets for the Skyfall premiere for me. She wasn’t alone in doing this.

She’s part of an online forum for fellow compers. Many of them also did what they could by entering quizzes and competitions for me. These were people I’d never met before, they only knew me from this blog, yet they put in lots of effort into doing something lovely for me.

And they came up trumps!

A man who goes by the online name of Greatbigrobot won tickets to a VIP advanced screening of the movie for me the night after the premiere. I was delighted. Then a couple of days later the charity, the Willow Foundation managed to get me invited to the premiere.

The tickets for the advanced screening were non-transferable so I ended up with a double dose of 007.  Well, you can never have too much Bond in your life.

Anna, Bond girl for the night

My friend Anna came with me to the advance screening. It was a really great night and another fabulous excuse to wear Candice and a posh dress. You wait for months for something like this to come along and then you have two big nights out in a row. Not that I’m complaining.

Before the film we were served champagne by handsome waiters, played roulette and met men in tuxedos. Surely this is what it must be like to be a Bond girl?!

Although I don’t imagine that Bond girls normally drink champagne from plastic glasses.

I was really touched that someone won the prize for me. But this wasn’t the first random act of kindness. Since being diagnosed, people that I don’t know have sent me presents.

When I went into hospital I received a care package which included tissues for tears and a notebook for ideas. During chemo I received a handbag in the post to help me look forward to happier times. Just a few days ago a Twitter friend sent me a teal green hat and earrings. Her gifts were to help make my bald look better and feel warmer.

I’ve also had cards from people who explain that we’ve not met but they know me through someone.

I’ve had so much love on Twitter too and from everyone that’s left comments on this blog.

Of course, the support I’ve had from family and friends has been wonderful but I didn’t expect so much good will from strangers. Knowing that lots of people, including many I’ve not met in real life, are cheering you on is an incredible feeling. It always gives me a boost and has been more help than I could have imagined.

Never for a second would I have chosen to have cancer. It may be the worst of times but it’s also shown me the best of so many people. 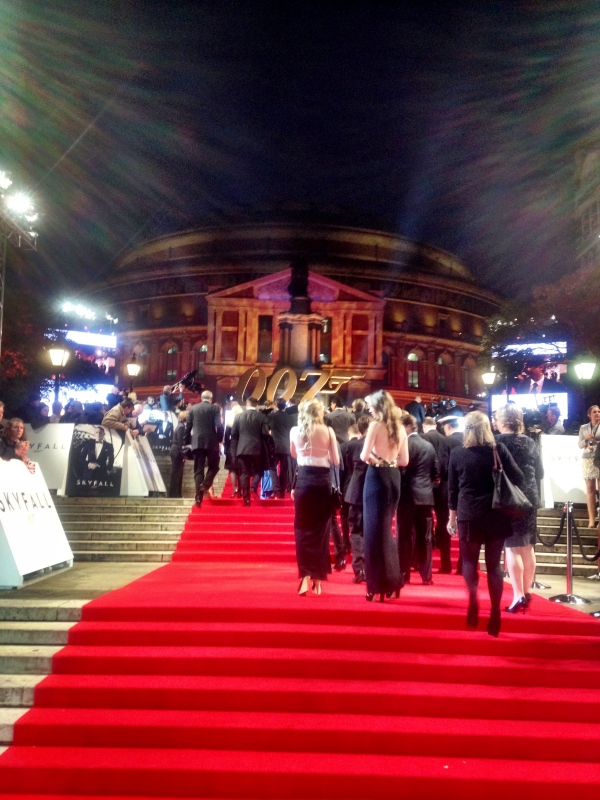 When you’re told that you must use the red carpet you just know it’s going to be a special night.

The 007 premiere was held at the very grand setting of the Royal Albert Hall. Neither the venue nor the red carpet was hard to miss. Even so, with the tickets we’d also been given a map embossed in gold to show us where we had to go.

As we turned into the red road, there were thousands of people lining the route ahead of us waiting for the stars of the show. The sight took my breath away.

As this was such a big occasion I wore Candice, my long blonde WAG wig. This was the kind of event she was made for.

I’d been given two tickets so I took along Chantal, my friend the flower girl. We’ve known each other for a few years now. We met at hospital because she too is a cancer survivor.

This was my way of saying thanks to Chantal. She came with me to many of my hospital appointments and chemo sessions. My friend drove us there in her massive van which is normally filled with flowers.

When I became critically ill after the operation, Chantal put her work on hold. Mum stayed with her for weeks and together they visited me as often as they were allowed to. Chantal was at hospital during the very worst moments, when it got so bad that we both wondered if I’d pull through.

I wish that somebody had told us back then that a few months later we’d both be stood on the red carpet for the world premiere of a James Bond film.

With lights, cameras and so many celebs, it was all pretty surreal. Beforehand I’d been quite nervous but once we were there this soon melted away. It was almost like we’d wandered onto a movie set. Or we were in some kind of dream.

Yes, we saw Daniel Craig and yes, he was just as handsome in real life. I certainly didn’t dream that part of the evening!

The red carpet was surprisingly long, wide and busy. It was packed with people all dressed up in black tie. It wasn’t just me but everyone around us looked excited just to be there. It was as if we were all heading towards a very special party.

Along the way we had to be careful not to bump into the Bond stars while they were still hard at work. 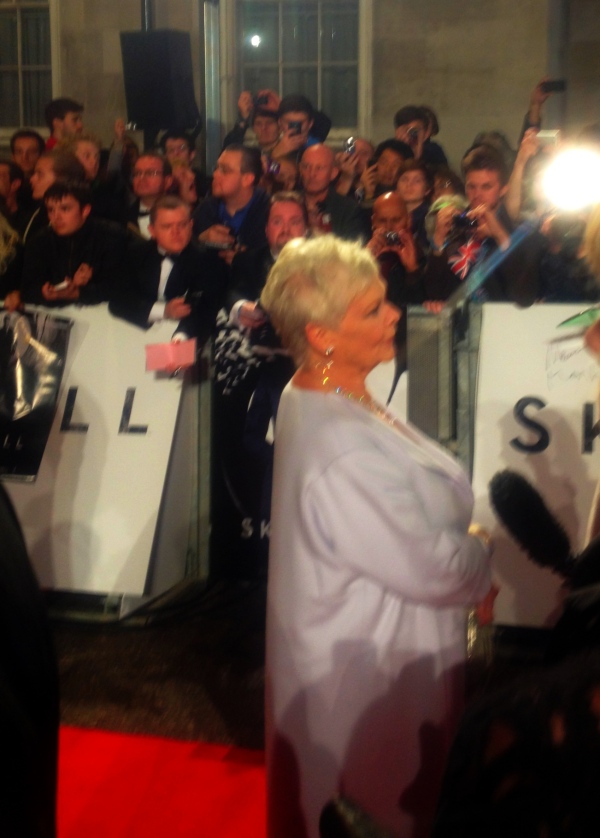 I thought that our seats for the premiere might not be too good but they couldn’t have been much better. We were in the stalls with film company executives in front of us and X Factor finalists behind us.

As the Albert Hall went dark, my heart skipped a beat. I could barely believe that I was actually there.

The atmosphere was incredible. There must have been several thousand people. I’ve never seen a movie on such a large screen and with so many other people. It felt exhilarating.

I loved Skyfall and thought Daniel Craig was brilliant as bond.

The film made me very aware of just how far I’ve come. I thought a lot about James Bond during the chemo but I’m not sure why I choose this character as my cancer killer. Although seeing 007 on the gigantic screen made me realise he’s the kind of hero everyone needs when they’re fighting their hardest battle. Nobody does it better.

Did we go to any of the premiere parties? Well, we didn’t intend to but somehow we ended up in a fancy hotel bar where there were a few familiar faces! This is what most people were drinking.

Of course we had to have one too. Shaken, not stirred.

This was one of the most amazing experiences of my life. It’s something that I’ll never forget. I was only able to go to the movie premiere thanks to the wonderful charity, the Willow Foundation. It’s their aim to create special memories for the future. They certainly did that for me.

The night was a celebration too. All the horribleness is over now. If the disease does come back then this will be something lovely to remember. But I truly hope that I’ll be able to look back and think of this an occasion when I was celebrated beating cancer for ever.

Over the past few months I’ve written a lot about being exhausted. On the premiere night I drank a bit too much, wore stupid high heels and stayed out far too late. All the kind of things I haven’t really done since I was diagnosed.

I was shattered the next day but for all the right reasons. I didn’t feel great and that’s a great feeling. It means I’m having a normal life again. I feel very glad to be alive.

It wasn’t so long ago, that just like today, I woke up stupidly early. Back then a heady combination of steroids and nervous energy meant that I couldn’t sleep. That was the morning back in May when I started chemotherapy.

I knew it was going to be horrendous but I was also well aware of just how important it was. All the tumours had been removed but I needed this to get rid of any teeny tiny cancery cells that might still be hanging around.

As I lay awake in the dark I thought about how the chemo was going to work. I’d been told how cancer fighters often come up with unusual ways of thinking about the treatment to try to take away some of the terror.

This is what I wrote in my blog post, Licence to Kill:

“I tried to think about what it would be like when the drugs went in. I turned every drop from the drip into a killing machine. A kinda James Bond. I imagined my own microscopic army of special agents. Just in case you’re wondering, I’m thinking Daniel Craig as James Bond….

…Anyway, I’m picturing my troops being launched into the killing zone with charm, cunning and a wry smile. Their mission is to destroy any rogue cancer cells.”

A few hours later when the toxic cocktail began to seep into my veins and poison my body, that’s what I focused on. It was the violent visualisation that I used during all the other sessions of chemo too. Whenever I was worried that potentially evil cells may be lurking inside me, I also thought about this fully loaded 007 army. They helped to shoot away my fears.

After six sessions of chemo it was mission accomplished. I got the all clear – the best news ever! The James Bonds had done the business. Of course, along with the drugs and the doctors etc etc. Since then the test results have been great.

So, back to this morning.

It’s a few months on from that first day of chemo; again I’ve woken up all excited and jittery and thinking about James Bond.

This time I’m not imagining gun-toting-cancer-killing-secret-agents blasting away at killer cells. No, I’m picturing 007 on a big screen. A mahoosive big screen. Daniel Craig is sat in the audience, all dressed up in black tie, surrounded by his co-stars. I’m there too. We’re all watching the latest movie. The difference is, this isn’t something else that I’ve just dreamt up; soon this will be for real.

You see, tonight I have a date with James Bond – I’ve been invited to the world premiere of Skyfall!!

The timing is brilliant. I’m finally feeling better than I have done in ages and now I’m off to a red carpet event in London featuring the very character that I thought of so much during the chemo.

It’s all thanks to the Willow Foundation. The charity was set up by Arsenal legend Bob Wilson and his wife Megs in memory of their daughter Anna who died from cancer at the age of 31. It aims to help young adults dealing with serious illnesses by arranging something amazing for them.

Already it feels special. Yesterday a man on a motorbike turned up at my house. Tall with broad shoulders, he was dressed all in black. As I opened the door, he gave me a wry smile and a large plain white envelope.

“I’ve been expecting you…”