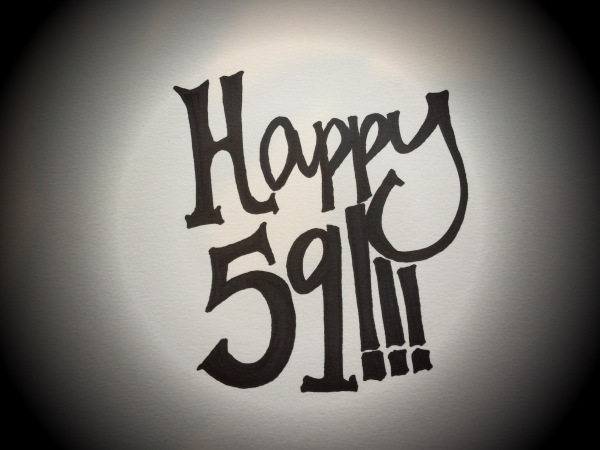 It’s a Tuesday and normally I’d be having chemo today. Thats been my routine almost every Tuesday since July. I’m at hospital as usual but I’m only having a magnesium drip. No toxic drugs. I’m very happy to say that my treatment has finished!!!

You have no idea how glad I am to be on a chemo holiday. I dreaded each Tuesday more and more. As I traipsed to hospital, I’d often be in a foul mood.

This has been the hardest chemo with chronic vomiting and crippling tiredness. The side effects have been horrific but whats been more difficult to deal with is the relentless nature of going through treatment. At it’s worst, it seemed like there was no end in sight.

My last treatment was chemo number 59. That’s in total since my first ever toxic cocktail more than a decade ago. It’s a score that I think is horrific and yet somehow impressive at the same time.

For this last treatment I was on a clinical trial. This means it wasn’t one of the standard chemos that’s offered to cancer patients. Part of the reason for the research is to determine the best dose for this new drug. I started off on a high dose and then it was reduced. There is no point of being on a low level of the stuff which does nothing. I was really ill until we found the right dose for me.

This was a phase one clinical trial so I was one of the first group of humans to test the drug. Plenty more patients will take part in trials before it could potentially become available as a standard treatment option. But that could take a while. The whole research process is far far longer than most people realise.

I feel privileged to have had access to this new drug. It’s exciting to be part of something thats so cutting edge and could help many people in the future. Like a lot of women with ovarian cancer, I’ve become resistant to the most common chemo thats used to treat the disease.

The best thing is that the new treatment has worked. My tumours have shrunk and my cancer is stable. This is the first chemo which has managed to shrink the tumours. There is also a chance that it’s made my clever cancer become more stupid. The result has made all the sickness and exhaustion worth it.

I’m going to make the most of this time. I’ll be ticking some more things off my List for Living. Right now I’m recovering. With the chemo and steroids slowly leaving my body, I’m able to start eating more healthily. I’m also trying to build up my stamina. As someone who often has to sit down to clean my teeth, thats going to take a while.

Hopefully I will now have several months, maybe more before I have to face chemo number 60. Please don’t tell me to be positive and that it might be considerably longer. I’m positive but I’m also pragmatic.

Each time I’ve finished chemo I’ve desperately dreamed that I could have years without needing another toxic cocktail. But my chemo holiday never lasts more than a few months. When you get that news, the disappointment is crushing.

To try to ease some of that next time, I’m prepared for just a short break. I’d like to be proved wrong.