I have a confession to make. The last two blog posts have been written under the influence. I didn’t realise it but both times I was on a steroid high. Chemo#1 and chemo#2 have gone something like this…

Tuesday – Have chemo along with a load of steroids to help my body cope with the toxic side effects. Tuesday night – Insomnia.

Wednesday – Feel so energetic that I go for a little run. I know. A run – the day after chemo! Wednesday night – Horrific nightmares followed by insomnia.

Friday – Wake up feeling like me. No high, no low, no desire to do any running.

On Wednesdays I felt amazing and was bursting with energy. The real problem was with that awful Thursday comedown. Both times it’s hit me hard and I have months of treatment to go. I couldn’t work out what was happening until I mentioned my mood swings to a doctor.

If I really needed to have so many steroids then I’d just deal with it but why put up with something that can be changed? 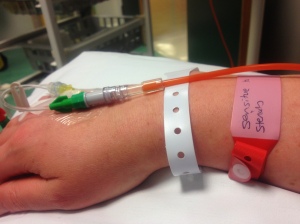 Before I started chemo#3 I asked if I could get the moody drugs reduced. It caused a bit of a kafuffle. Not many people opt for this. Steroids are used to reduce this risk of your body from having a bad reaction to chemo; like that patient did last week. Apparently it’s rare but a really bad reaction can be deadly. Cutting back on the steroids was a gamble although the doctor on the ward preferred to call it a calculated risk.

I knew that my body copes well with chemo. Oh yes, it’s one of my hidden talents. But I still wasn’t sure and neither were the medical staff. In the end we agreed that I’d have half the usual steroids and be closely monitored. 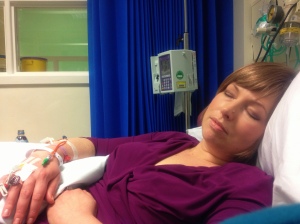 If something scary is going to happen it will do so in the first 15 minutes or so. I wanted to be awake to watch and worry however like before, the chemo cocktail put me straight to sleep. I didn’t even have time to take my wig off. I was relieved to have my friend, Chantal the flower girl at my side.

So what happened? Nothing. I was totally fine and slept all the way through the critical period and beyond. I’m still writing this after all!

It was quite stressful though. Not exactly what you need. I’m trying hard not to turn chemo into a big deal. I want it to be just part of weekly life.

As I’m keeping everything normal I offered to work an early morning shift before chemo in the afternoon. Getting up at 4.30am wasn’t great. But that was the whole point. I was playing mind games with myself and it worked. My brain was more annoyed about the stupidly early hour rather than the prospect of chemo. 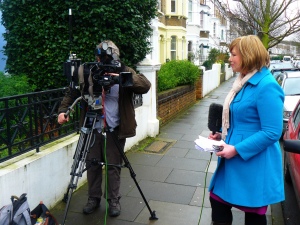 It was a busy morning at work doing live TV reports and interviews for the BBC News Channel. I didn’t have time to think about my impending trip to the chemo cocktail bar.

I can see why my consultants have encouraged me to continue to work if I’m able to. The morning made me realise more than ever just how important it is to do the things you really enjoy. It gives you a sense of purpose that you’ll never get from a trip to hospital.

Also work is a big part of my identity. I may have cancer but that doesn’t define who I am. Being active is another part of my identity which has nothing to do with the disease. Earlier I went out for some exercise. I used to be very sporty and I’m keen to get fit again. Playing netball again is on my List for Living which I’m still working on.

I think that I’m now having much less of a steroid rush. The insomnia wasn’t so bad last night. The steroid highs made me feel like I had boundless energy. Today I managed to jog for two and half minutes with great difficulty. It’s good not to feel so hyper but just happy, tired and rubbish at running again.