It’s all over now. My last chemo, thankfully, was a couple of weeks ago. It’s probably not the final one ever but it’s the last one for a while. Maybe for months. Hopefully for years. I’m so happy to be at the end of this current course of treatment. I’ve now had 35 chemo cocktails in total, I think, most of them over the last two years. To not have to face the prospect of that evil stuff, like that above, dripping into my veins is wonderful.

I hope the break is long enough to get some hair. It’s still a shock to see my bald head. I really miss not being able to tie it back. Yes I could do that with some of my wigs but it’s not the same. Anyway I’m not really into wigs at the moment. Wearing a wig takes up precious energy. Instead most days I wear a soft hat. It’s much more comfortable and doesn’t seem out of place at this time of year.

But to celebrate chemo no 6 I wore my favourite wig to hospital. It’s the one you see me wear when I’m occasionally on television. I now have an impressive collection of them however my work wig is the one that I love wearing the most. Despite this it still has no name!

I always like to try and look smart when I go for treatment or consultations. It gives me back a tiny portion of control, knowing that I’m not too ill to wear make-up and a dress. If I look well, I feel better. I feel worse when I don’t make an effort. Cancer forces you to give up so much of your identity that you have to cling onto what you can.

Chemo 6 was totally unremarkable. I saw my consultant, The Professor. It was the best kind of appointment as there were no test results to be told about. We ran through all the side effects of the past few weeks but there was nothing alarmingly awful. Just standard awful.

For this treatment, mum and my aunt Rose came along. To keep them entertained I sent them out on missions. First to the pharmacy, now thats always it’s an adventure which tends to take ages – finding the place and then waiting in the inevitably long queue. After picking up my prescription I asked them to go in search of a jacket potato with melted cheese. They were successful on both counts.

I then slept for a few hours. Probably the most interesting thing was eating a baked potato in bed in the afternoon. It was the first time I’d had eaten something hot while having chemo. The day really was that dull.

The nurses stayed late to ensure that my treatment got finished. I ended up being the last patient to leave the ward. Parts of it were already in darkness and the cleaner had started his evenings work. As I walked out my spirits lifted. I had a dizzy, drunk, fuzzy feeling. The potent cocktail of super strength drugs and steroids was acting like the rocket fuel, giving me the boost I needed to get home.

I felt so wired and that we started our journey by bus. It took us through streets that have become so familiar to me. Past the school where I used to play netball matches for the BBC team and then along a road to the sports centre where we used to train. The outdoor court we used was next to a row of football pitches. It had a concrete canopy as it was just below a busy fly-over. With such a stark, urban setting, it always felt like the set for a trainer advert.

The bus stopped near the training ground and a sporty looking woman got on. She was dressed in the kind of kit that I used to wear for netball. As we travelled further away from the hospital I smiled to myself. I realised that this was a tantalising glimpse of what my life after chemo could be like. 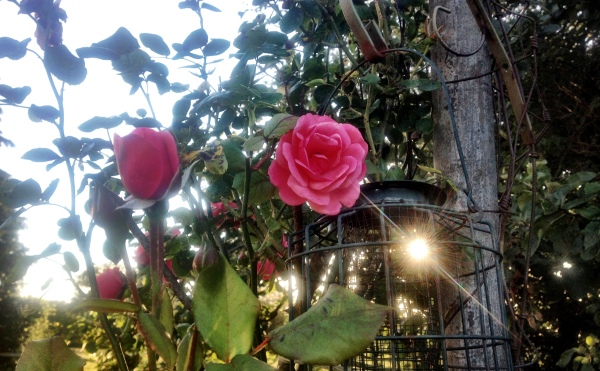 It’s been a while. Far too long since I last updated this blog. I’d like to say that I’ve been away on some grand adventure. But no. I’ve just been shattered. I’m glad to say that my radio silence is not due to being ill again.

It feels like I’m being stalked by tiredness. I can’t just shake it off. Whenever I think that I’ve beaten it and I do more, like have a sort of normal day, it comes back again and knocks me sideways.

Of course I’ve spent plenty of time over the last year and a half being exhausted. But this is a constant and enduring kind of frustrating fatigue. My bones and muscles feel hollow.

I haven’t stopped doing things but I tend to do less and at a much more leisurely pace. This gives you more of an appreciation of the simple pleasures in life. I’ve been enjoying spending time with family and catching up with friends including some that I haven’t seen for decades!

Also I’ve now found new ways of being active without moving much. I’ve started doing a bit of gardening. Well, pruning roses in my parent’s garden. I either stand or sit and chop away. I quite like cutting out the dead and dying parts of the plant and ending up with a rose bush that’s very much alive. I’ve been surprised at how therapeutic it is. Plus it makes my arms ache, in a good way.

Back in the day before all the cancer stuff happened I had a personal trainer. One of the things we used to work on was improving my fitness so I’d be better at netball. My PT used to make me work so hard that I’d swear at him which he loved as he knew he was doing his job properly.

I don’t see my personal trainer anymore but not so long ago he sent me a present in the post. Inside a massive cardboard box was a netball. Now I spent small packets of time throwing the ball in the air, sometimes when I’m sat in my comfy chair in the living room. When you’re so unbelievably tired being able to do small things means so much.

Despite being wiped out most of the time, I do feel well. It’s now three months since my chemo ended. I’m gradually beginning to believe that things may not turn out quite as bad as I’d expected. After my devastating diagnosis in December I thought my life would now be a relentless circle of cancer-chemo-cancer-chemo etc with little time to recover in-between. Now I’m daring to think the gap between may be long and lovely.

Recently someone asked me what happens next. I replied that I was just waiting for the cancer to become active again. But as soon as I said it, I knew that wasn’t right. I’m doing anything but waiting. It was at that moment I realised something special. While the disease is dormant I’m getting on with enjoying life even though it’s now a seriously slow pace.