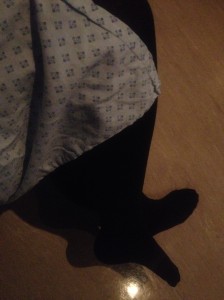 Reluctantly I’ve been back in a hospital gown again. I sat in a cold examination room with its blue blinds firmly closed and waited for yet more tests.

As if it’s not bad enough dealing with cancer, there’s now something else which could be extremely serious.

I’ve mentioned my breathlessness before. I end up gasping after just a tiny amount of activity. Doing something like walking and talking is almost impossible.

After my operation I had a bit of a problem with this. I thought it was because a lump of cancer had to be removed from my diaphragm and that I was short of breath as it healed.

Since starting chemo it’s got a whole lot worse. I find it hard to breathe after just walking a few metres. According to The Professor this probably isn’t connected with the chemo. So I’m having a series of tests.

I was wired up in the examination room. As several electrodes were stuck on my skin I looked away and focused on the walls which were painted baby blue. The last time this happened I’d stopped breathing altogether. Luckily I woke up before they had to be used.

A young doctor in a sky blue medical gown prodded me with something that resembled a small plastic bottle of deodorant. The end was covered in cold clear gel. She pushed it hard into my chest. With her other hand she tapped a key board to take images of my heart.

The computer beeped as pictures of my very vital organ were captured from all possible angles. On the monitor my heart pumped away in black and white glory.

After being so focused on having something deadly in my body, it’s a fantastic feeling to watch something that looks so healthy inside me.

The doctor turned on a loud speaker and recorded the sound of my heart beating. To my ears it was loud and strong, almost like a parade of marching soldiers. It made me think about my James Bond army. They’ve certainly been doing a brilliant job. I wonder what mission I’ll send them on next if there’s a problem with my heart. Or lungs. Or something else.

Hopefully it won’t come to that.

I could be breathless all the time as I’m now so unfit. That’s a really scary thought. But at least the cure will just involve plenty of exercise rather than anything which involves me wearing another of these hospital gowns.

A more senior doctor came into the blue room to check the images. Wow he looked like someone out of ER. Think George Clooney but younger and Australian.

Anyway back to the small screen. George was very happy. It was just his initial impression but it seems that everything appears very healthy. After my cancer nightmare it’s lovely to hear positive results. I got him to repeat the news. He reassured me that I had a good heart.